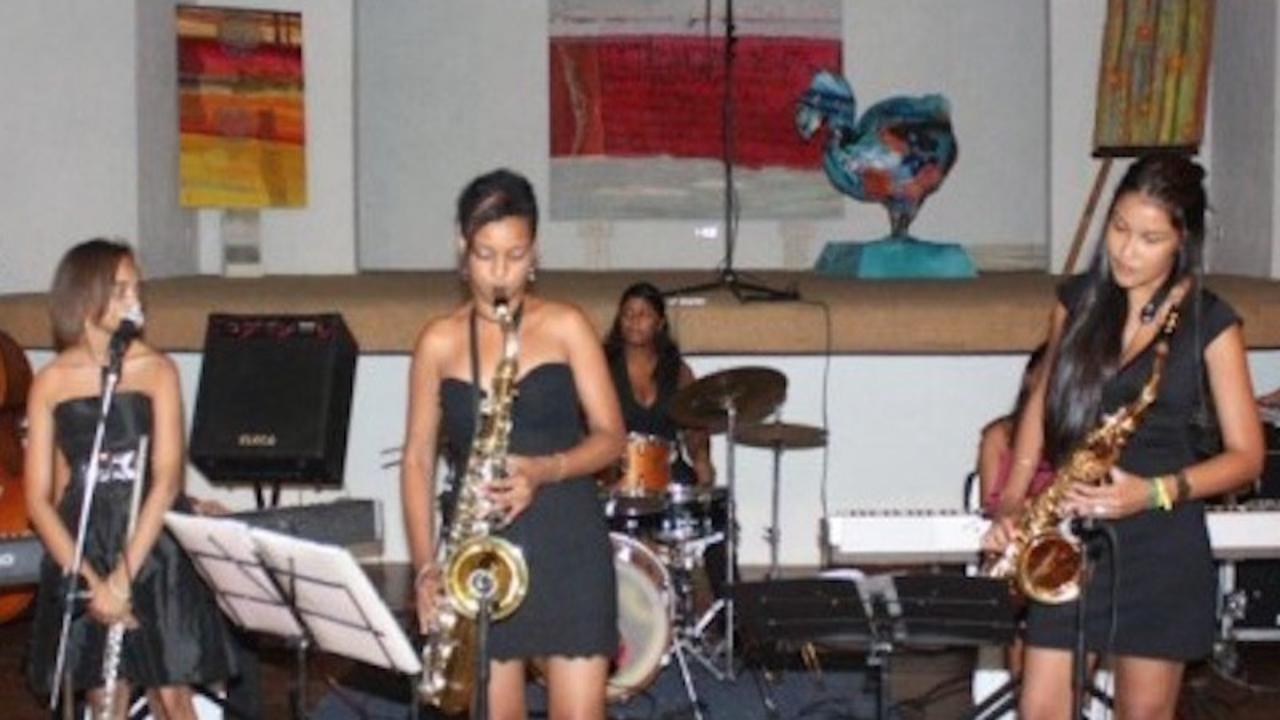 This article has been created to showcase how Music Education can be a powerful catalyst for positive Social Change. Through this interview with José Thérese, Director of Atelier Mo’zar, School of Music, the reader learns of the amazing ways that Mr Thérese has used music education to empower youth in overcoming poverty and social inequality.

It is with a contagious smile and relaxed look that José Thérese opened the door of his apartment at Baie du Tombeau. Amidst a pile of papers and a transverse flute, it becomes clear that we are at a musician’s house, but what kind of musician exactly? You may have seen him in a Jazz concert with his students at the Caudan Waterfront or you may have heard about him through the press: Maestro José Thérese is the director of the Atelier Mo’zar ( Mo’zar being a creole wordplay meaning ‘my way, my style’), a music school situated at Roche-Bois, which delivers music courses to children coming from difficult social backgrounds.

Created on the 2nd February 1996, as José Thérese recalls, the Atelier’s aim is to “give back hope to children who have failed their Certificate of Primary Education(CPE) examinations”. After spending 10 years studying and working at the Dansk conservatorium of Denmark, José returned to Mauritius, supposedly on vacation, which actually turned out to be …a turning point! Appalled by the number of street children in his native Roche Bois, he decided to stay and to use his experience as a musician to help those children out of poverty: thus was born the Atelier Mo’zar.

But how does it work actually? As José Therese explains, far from being an extra-curricular activity, “the Atelier is a school where children learn music. We enrol them at the age of 11, after a failure at the end of primary level”. Indeed, the Atelier Mo’zar specifically targets children from under-privileged areas, having undergone academic failure but who possess a talent for music. The idea is based on a simple yet atypical principle: helping children fight against poverty and exclusion by developing their talent for music.

Hence throughout their learning, Atelier Mo’zar students acquire sound knowledge of contemporary music with a professional objective- that of having a career in music and all this in an international environment. It is also worth mentioning that the Atelier’s students take part to the Royal School of Music examinations of England and that the courses range from musical composition, song writing, instrumental learning like saxophone, trumpet or piano and guitar, amongst others.

“Finding your identity through music”

Talking about the impact of music on youths coming from difficult background, José Thérese is clear: “music is like a profession. The students learn to work and take part in exams”, thereby becoming music professionals. This, in turn, empowers them to develop the necessary skills, direction, and vision for creating a better life, and move out of the social-economic traps they were previously in. Thus, music helps those children who “have been hurt by the educational system” to “gain back confidence through music so that they are able to find their identity“. They not only learn a profession, but also all the rigor, discipline and group work that music requires, that allow them to become conscious and empowered adults. Around 2000 youths have benefited from the program since it started.

It’s not without an ounce of pride that José Therese told us that his students have often represented Mauritius during international music festivals, like the Tohatoha-bato Jazz festival that will be held at Madagascar in June. Moreover, many of the previous students of the Atelier are now working abroad in the hotel industry or in orchestras around the world.

In this video, José talks about the Atelier Mo’zar and why it was created.

If there is one wish that José Thérese has for Atelier Mo’zar is that it continues to flourish. It is currently on its way to expand in terms of infrastructure (a branch will be opened at Mahébourg by September 2014) and aims at enrolling around 400 children around the island) and in terms of its courses- will also include theater and dance.

Any message for our youths Mr. Therese? – “It’s not because you ‘failed’ at school that you have no future: you can always succeed in life”. On that note of encouragement, we can only wish the Atelier Mo’zar, a good continuation in its projects.

Examples from around the World

500.000: the number of children who benefitted from the EL Sistema or EL Sistema-inspired project around the world since 1975. Created, in a garage, with eleven children only, the project aimed at bringing a difference in the lives of children from difficult areas of Venezuela. It all emerged from the idea of one man: Dr José Antonio Abreu (yet another José!) or Maestro Abreu, an economist, conductor and musician who believed in the power of music education to change the lives of children who would otherwise be entangled in myriads of social scourges like drug dealing, sex-working and gangs. Catalysed by its huge success in Venezuela, the project has since then been emulated around the world, especially in the USA.

In an interview given to The Guardian in 2012,Maestro Abreu expressed his views that the project in itself is a ‘human development‘ project. Indeed, many children benefiting from the orchestras not only became musician, but also lawyers, civil servants or doctors, which means that the project in itself has a much wider impact on the life and future of these children.By learning through orchestras, children learn how to work and support each other.

As Maestro Abreu beautifully summarized it : “The huge spiritual world that music produces in itself, ends up overcoming material poverty. From the minute a child is taught how to play an instrument, he is no longer poor. He becomes a child in progress, heading for a professional level, who’ll later become a citizen.”

Shelby Emilien was a SIDS Youth Representative for the AIMS Region and worked as intern in the Education for Sustainability Programme. She has a Bachelor Degree in Political Science and International Relations and has worked since 2012 in areas related to sustainable development, namely conservation, project assistance and the media. She has a special interest in research, especially research related to educational systems and reform.

All pictures are owned by Mo’zar Atelier Musique and have been retrieved from their Facebook page with their permission.

Note of Respect: This article was first published on our Education for Sustainability platform on 17 June 2014. Unfortunately, José Thérese passed away in November 2014, a few months after our interview with him. May he rest in peace. The purpose of sharing this publication is to honour the work he started.